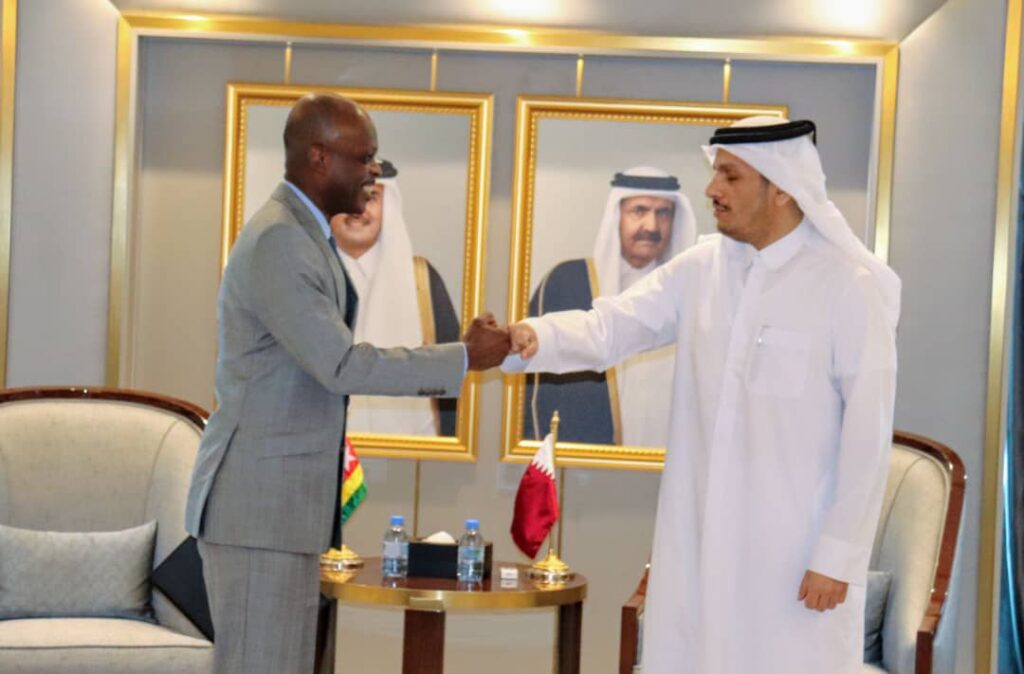 This visit is part of the development policy of the Head of State, His Excellency Faure Essozimna GNASSINGBE, whose new vision requires that Togolese diplomacy mobilizes all potential partners to support the implementation of the National Development Plan (PND) and the 2020-2025 government roadmap.

During his stay, Minister DUSSEY had talks with his Qatari counterpart. Issues related to bilateral cooperation and regional and international issues were at the center of their discussions.

At the bilateral level, Ministers Robert DUSSEY and Sheikh Mohammed Bin Abdulrahman Al-Thani welcomed the excellent quality of the relations of friendship and cooperation which continue to grow stronger every day between the State of Qatar and Togo.

The two personalities especially welcomed the signing in Doha by the Togolese delegation, on April 30, 2018, of six (06) conventions and memorandums of understanding in several areas with the Emirate of Qatar.

In this regard, they expressed the strong desire to encourage periodic diplomatic consultations on questions of major importance, in particular in the political, economic, scientific and cultural fields for their two countries.

With regard to economic cooperation, the two Ministers noted the need to strengthen cooperation between the private sectors of the two countries through the organization of exchange and prospecting visits by economic operators in Togo and Qatar. .

The two Foreign Ministers expressed the wish to sign several other agreements, within the framework of the strengthening of economic cooperation between the two countries, in particular in the air transport sector.

Prof. Robert DUSSEY took the opportunity to salute the choice made for the State of Qatar as the host country for the 22nd edition of the FIFA World Cup competition, scheduled from November 21 to December 18, 2022, and wished a very good luck to the Qatari national team.

At the regional level, the Qatari Minister especially congratulated the President of the Republic His Excellency Mr. Faure Essozimna GNASSINGBE in his involvement in resolving the crises in the Sahel and his determination to fight terrorism.

At the international level, the two Ministers reiterated the commitment of their countries to remain mobilized in the search for international peace and security. They also welcomed their convergence of views regarding the pooling of their efforts in international bodies to achieve security and development objectives, dear to their peoples and to the international community.

The two personalities took the opportunity to appeal for international solidarity with a view to non-discriminatory management of access to care linked to the health crisis caused by the Covid-19 pandemic and deplored the human consequences. extremely serious and painful social and economic issues.

At the end of his stay, Minister DUSSEY expressed his deep gratitude to the Qatari authorities for the warm welcome extended to him and his delegation during his stay. He in turn invited his Qatari counterpart to pay an official visit to Togo on a date at his convenience.