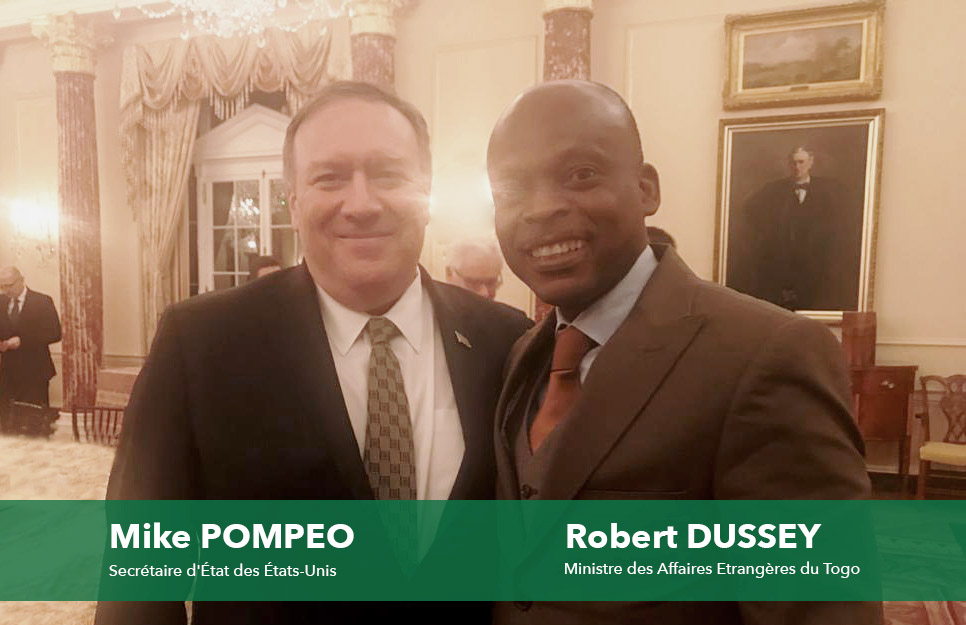 1- At the invitation of the US Secretary of State, Mike POMPEO, the Minister of Foreign Affairs, African Integration and Togolese Abroad, Robert DUSSEY, paid a visit to Washington.

3- In his intervention, he recalled that religious freedom which is one of the difficult but essential conquests of democratic modernity, is in danger in many regions of the world and underlined that violent extremism, under its various ramifications , threatens this freedom.

4- In this regard, he demonstrated that the burning and vandalization of places of worship, the assassination of religious men are, among other things, threats which degrade our societies, the humanity of man and which manifestly translate an attempt to exterminate religious freedom, and of freedom all over the planet.

5- In addition, Professor DUSSEY praised the watch and regulation work that states in Africa do to guarantee the exercise of religious freedoms which are fundamental human freedoms before urging them further to protect the exercise of these freedoms against extremism and the terrorist threat.

6- Specifically addressing the case of Togo, Minister DUSSEY stressed that religious freedom is a right enshrined in the fundamental law.

7- Also, the Minister said that in Togo, religious denominations have the right to organize and freely exercise their activities in accordance with the law and the principle of secularism and non- discrimination based on religion and that the country set up on May 15 an Interdepartmental Committee to prevent and fight against violent extremism and a strategy to prevent and fight against violent extremism which aims to protect compatriots from threats and protect the free expression of individual freedoms including religious freedoms.