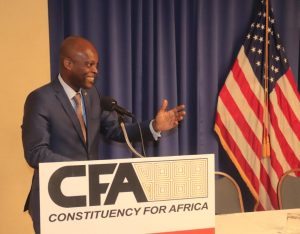 Mr. Chairman of the Constituency for Africa (CFA),

Ladies and gentlemen of the CFA Board of Directors,

First and foremost, I cannot help but commend the non-profit work done by the Constituency for Africa, for the benefit of Africa, and express all our support, our solidarity and our congratulations to the key officials of this organization, who work for the best future of our continent, YOUR continent.

First, and this is reason number one: the history of the emancipation and evolution of human societies has never been written without the help of the diasporas. I find it useful to recall here the pioneering and avant-garde role played by the African diaspora across the Atlantic, in Africa’s march yesterday towards the reconquest of its confiscated freedoms and independence through great names such as Richard Wright, William Du Bois, Malcolm X, Marcus Garvey. The Pan-African ideal was part of the struggles of these major figures of the African-American diaspora.

The second reason is very simple: the wish to hasten the transformation of the continent requires that we work in synergy and a coalition of our forces. The African diaspora, rich in its diversity and its capable human resources, is a significant partner in the march of the continent towards new horizons, towards that other Africa, the Africa that we want. United, and in good understanding with the diaspora, “Africa can become, once and for good, one of the greatest forces in this world”, as said by Kwame N’Krumah, a great figure of the Pan-Africanism and the theorist of consciencism, who laid the foundations for the renaissance and transformation of Africa in the sixties.

And reason number three: a transformed and developed Africa is an opportunity for all those whose roots and destiny are linked to Africa. Malcolm X was right in 1964 at an OAU summit in Cairo when he emphasized in a both realistic and prospective visionary speech that the development of Africa was a necessary step for the evolution of the cause of Black people around the world. African problems are African-American problems and African-American problems are African problems, stated Malcolm X. The outrage raised in Africa by the recent death of George Floyd is a very good illustration of that statement.

We, the present generations, must give Africa the means for its transformation. The future of the continent is not predetermined, but rather to be built and it is our responsibility. African Americans, who are Africans because there is an essential part of Africa in them, have potential. By playing its part in the continent’s transformation process, the African diaspora of North America can help Africa regain its full self-confidence. The evil of Africa is that its march through universal History is often too thwarted by those who are only interested in it for their own geostrategic and economic interests. By filling the void, which is conducive to exogenous influences, through collaborative and coordinated work, we will succeed in taking control of the continent’s destiny.

There are undoubtedly in the African-American Diaspora numerous qualified doctors, economists, businessmen, investors, writers, philosophers, computer engineers, in short, valuable human resources that Africa needs in its progress towards the future. And to paraphrase a line from the national anthem of my country, Togo, I would say: “O come! You, African-American Diaspora, and let us build and transform Africa”. Finally, I would like to inform everyone that, on Togo’s initiative, the African Union will soon declare the Decade “2020-2030” as the “Decade of African roots and diasporas”.

Thank you for your attention.