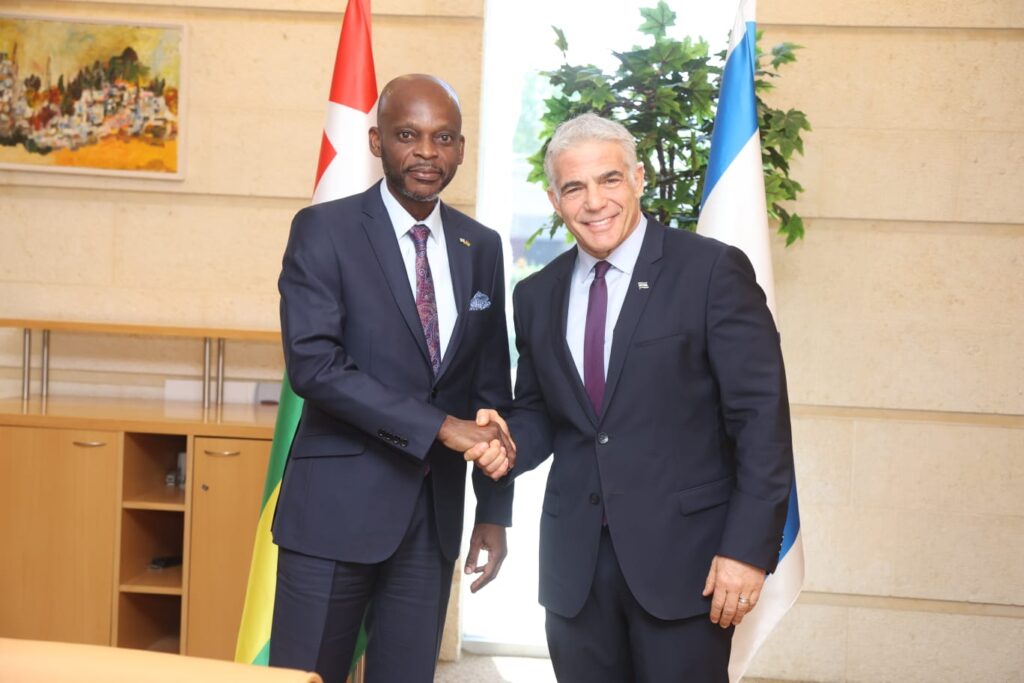 1. At the invitation of his counterpart in the State of Israel, H. E. Mr. Yaïr LAPID, H. E. Prof. Robert DUSSEY, Minister of Foreign Affairs, Regional Integration and Togolese outside the Togolese Republic made an official visit to Jerusalem from June 1 to 3, 2022.

2. This visit reflects the desire of the two countries to revitalize, update and further deepen the relations of friendship and cooperation that have united them since the establishment of diplomatic relations in 1961.

3. During the work that marked this visit, the two parties reviewed these relations as well as the projects that have been implemented within the framework of their cooperation both at the bilateral level and within the framework of regional organizations and international. In this regard, they welcomed their constantly increasing quality as well as their dynamism which have enabled concrete achievements in several areas, in particular, agriculture, health, education and training.

4. In order to better adapt this cooperation to the current context as well as to the strategic options of the two States at the economic level, the two parties have agreed to update the agreements they have already signed, some of which date from 1961 and the signing of new agreements.

5. In this regard, Minister DUSSEY presented to the Israeli side the roadmap adopted by the Togolese government for the period 2020-2025, emphasizing the priority areas that could benefit from support or partnerships from the government. or the Israeli private sector. These are the following areas:

6. In order to deepen the discussions on these identified areas of cooperation, a meeting between the Israeli cooperation agency MASHAV and the sectoral departments concerned will be organized in Lomé or online.

7. Both parties are also committed to facilitating the rapprochement of their communities of businessmen, through periodic exchange trips and the conclusion of business partnerships. To this end, they agreed to organize a Togo-Israel economic forum in Lomé or Tel Aviv. Technical discussions will be held between the two parties in order to specify the content as well as the technical and practical details of this forum which will lead in particular to the installation of Israeli industrial companies within the Industrial Platform of Adéticopé (PIA).

8. Regarding the security and political situation in West Africa, their Excellencies Ministers DUSSEY and LAPID expressed their concern over the persistence and expansion of terrorism, violent extremism and other forms of criminality as well as the adverse effects of these phenomena on the stability and development of the sub-region.

9. They also referred to the ongoing political transitions in Burkina Faso, Guinea and Mali. In this regard, Minister DUSSEY recalled Togo’s efforts to help restore peace and security in the sub-region and to find rapid and successful outcomes to the transition processes underway in the countries concerned. These include the Togo strategy in the Sahel presented in September 2021, and the symposium on political transitions and resilience to violent extremism held in Lomé on March 5 and 6, 2022.

10. Concerning Togo specifically, he provided his Israeli counterpart with detailed information on the two terrorist attacks perpetrated in the north of the country successively on the nights of 9 to 10 November 2021 and 10 to 11 May 2022 and took this opportunity to seek the support of the State of Israel in Togo in its fight to prevent the installation of terrorist groups on its territory.

11. The two parties reiterated their common attachment to issues of international peace and security as well as their readiness to collaborate, both bilaterally and within international organizations, in the fight against threats to they.

12. They also underlined the need to maintain permanent consultation among themselves with a view to coordinating their positions on international issues of common interest and mutually supporting their candidacies for positions in international bodies. Minister LAPID took this opportunity to reiterate to Togo the thanks of the Israeli government for the support it provides to Togo within the framework of the United Nations.

13. During his stay in Jerusalem, Minister DUSSEY also discussed with officials of the Israeli cooperation agency MASHAV, representatives of Israeli companies and institutions operating in the fields of information technology and communication, agricultural innovation, and humanitarian aid. He also took part in the commemoration of Africa Day in Jerusalem and gave a presentation on the topic of immigration and diasporas to the research program of the Ruppen Academic Center.

14. At the end of his visit H.E. Prof. Robert DUSSEY, through his counterpart, expressed his sincere thanks to the Israeli people and government for the warm and friendly welcome as well as for the quality of the hospitality which were reserved for him and his delegation.

15. He invited H.E.M. Yaïr LAPID to pay an official visit to Lomé. Minister LAPID said he was very happy to accept this invitation, the date of which will be agreed upon by mutual agreement.