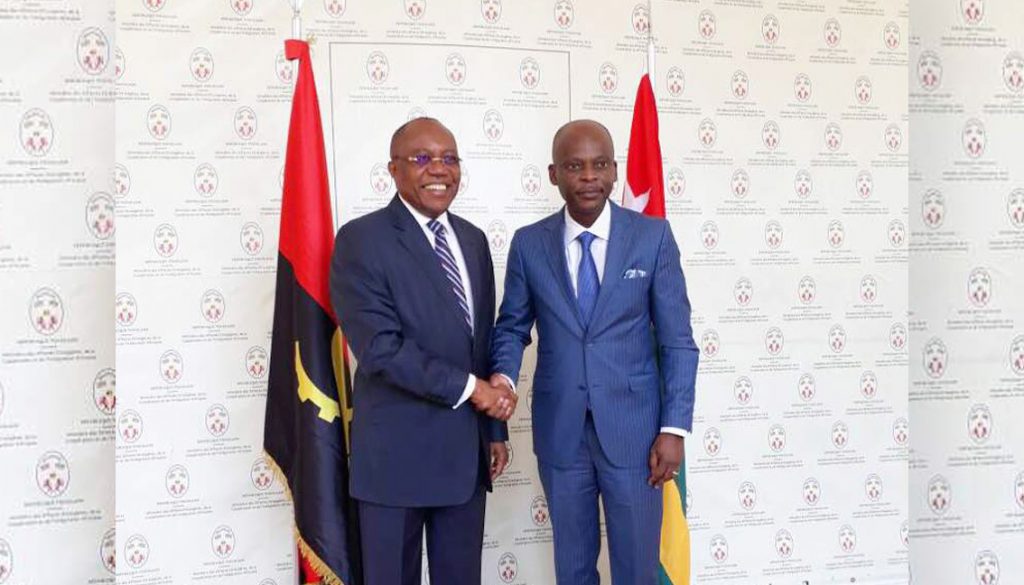 1-In the framework of the excellent relations of friendship and cooperation existing between Togo and Angola, an Angolan delegation led by His Excellency Manuel Domingos AUGUSTO, Minister of Foreign Relations, carrying a message from the President of the Republic of Angola to his counterpart in Togo, paid a working visit to Lome, Togo, on 18 and 19 April 2018.

2-During this visit, the Angolan Minister exchanged with his Togolese counterpart, His Excellency Professor Robert DUSSEY, on issues of common bilateral and international interest.

3-Addressing the bilateral issues, the two Ministers welcomed the excellent relations of friendship and cooperation that unite their two countries and pledged to work to strengthen them, particularly in the political, military , safe, economic, technical, social and cultural.

4- The Ministers Manuel Domingos AUGUSTO and Robert DUSSEY reviewed the various legal instruments of cooperation existing between Togo and Angola.

5- With regard to the socio-political situation in Togo, Minister Robert DUSSEY informed his Angolan counterpart of the progress of the political dialogue held under the auspices of the Ghanaian President His Excellency Nana Addo Dankwa Akufo Addo, facilitator of the Economic Community of West African States (ECOWAS).

6- Minister Robert DUSSEY also informed his Angolan counterpart of the encouraging results of the extraordinary ECOWAS summit on the political situation in Guinea-Bissau held in Lomé on April 14, 2018, and took this opportunity to congratulate him on the major role played by the Angolan authorities, particularly within the Community of Portuguese Speaking Countries (CPLP).

7- The Angolan Minister of Foreign Relations Manuel Domingos AUGUSTO, in turn, warmly congratulated his Togolese counterpart for the efforts that Togo continues to deploy, especially during its current chairmanship of ECOWAS, to maintain peace and security in the subregion, in Africa and in the world.

8. The Angolan Minister also expressed the support of his country for all the decisions taken by the Extraordinary Summit of ECOWAS held on 14 April 2018 for the end of the crisis in Guinea Bissau.

9- The two heads of diplomacy have also called for the intensification of trade and economic exchanges leading to shared growth beneficial for the Togolese and Angolan populations. In this regard, they agreed on the need to speed up the process of establishing the Togo-Angola Joint Cooperation Commission and the forthcoming signature of a visa-free agreement for holders of diplomatic passports and service of both States.

10- With regard to international issues, the Togolese and Angolan Ministers reaffirmed their firm will to strengthen the role, capacities, effectiveness and efficiency of ECOWAS and ECCAS with a view to curbing the phenomenon of radicalization and violent extremism on the continent, and stressed the need to address the threat posed by these scourges.

11- The Togolese Minister informed his counterpart that discussions are under way between ECOWAS and ECCAS with a view to the forthcoming meeting in Lomé of a summit meeting on this issue, which is a concern major.

12- The Angolan Minister welcomed the proactive actions and initiatives deployed in the framework of the two regional groups that helped to resolve the crises in their respective community areas and reaffirmed the commitment of his Government to work for the strengthening of peace and security on the continent.

13- During the audience that the Head of State granted him, the Angolan Minister congratulated His Excellency Faure Essozimna GNASSINGBE, President of the Conference of Heads of State and Government of ECOWAS, for his commitment , alongside the mediator, His Excellency Professor Alpha Condé, who helped to resolve the crisis in Guinea Bissau.

14- At the end of his visit, His Excellency Manuel Domingos AUGUSTO, Minister of Foreign Affairs of the Republic of Angola, expressed to his counterpart Robert DUSSEY, to the Government and the people of Togo, his warm thanks and deep gratitude for the warm and fraternal welcome that was reserved during his visit.

15- The Angolan Minister invited his Togolese counterpart to pay an official visit to Angola.

16- His Excellency Prof. Robert DUSSEY accepted this invitation with pleasure. The date of this visit will be fixed later through the diplomatic channel.