Visit of the Minister of Foreign Affairs of Gabon to Togo 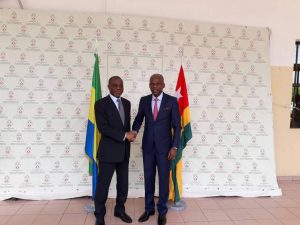 JOINT COMMUNIQUE SANCTIONING THE VISIT TO TOGO OF HIS EXCELLENCY NOEL NELSON MESSONE, MINISTER FOR FOREIGN AFFAIRS, COOPERATION, FRANCOPHONIA AND REGIONAL INTEGRATION, IN CHARGE OF THE GABONES OF ABROAD OF THE REPUBLIC OF GABON

1- At the invitation of the Minister of Foreign Affairs, Cooperation and African Integration of the Togolese Republic, HE Prof. Robert DUSSEY, His Excellency Noël Noël MESSONE, Minister of Foreign Affairs, Cooperation, Francophonie and Regional Integration, in charge of Gabonese Abroad of the Gabonese Republic, carried out a friendly and working visit to Lomé on 19 and 20 April 2018.

2-During this visit, the two Ministers exchanged views on issues of common interest of a bilateral, regional and international nature.

3-Addressing bilateral issues, Ministers MESSONE and DUSSEY welcomed the excellent relations of friendship and cooperation that unite the two countries and pledged to work towards their strengthening, particularly in the political fields economic, scientific and cultural. To this end, they agreed on the need to relaunch the activities of the Togo-Gabon Joint Cooperation Commission and the forthcoming signature of a visa waiver agreement for the holders of diplomatic and service passports of the two countries. States.

4-Recalling the need for the exchange of opinions and the organization of permanent consultations in various fields related to issues of common interest, they signed a Memorandum of Understanding between the Ministries of Foreign Affairs of the two (02) countries.

5- Considering the issues of cooperation on migration, the two Ministers agreed on a concerted management of cases of Togolese living in an irregular situation in Gabon including through a system of sharing of prior information and a concerted organization of repatriation operations with respect for the rights of migrants.

6-In this regard, HE Prof. Robert DUSSEY stressed the need for an incentive for the voluntary return of Togolese migrants in an irregular situation, in particular by reducing or canceling the visa fees for final exit from Gabonese territory and recalled the urgency of the revision of the agreement on free movement of persons and goods, employment and establishment of 21 March 1975 between Togo and Gabon.

7-The Ministers DUSSEY and MESSONE also welcomed the work undertaken by experts from both countries to prevent and punish child trafficking through effective cooperation between the two (02) States. To this end, the two Ministers agreed on the forthcoming signature of the agreement on the fight against child trafficking in order to facilitate cooperation and collaboration in the investigation, arrest, prosecution and extradition of children. guilty through the competent authorities of each State.

8. With regard to the political situation in Togo, the Minister DUSSEY informed his Gabonese counterpart of the progress of the political dialogue under way and under the facilitation of the Presidents of Ghana and Guinea, their Excellencies Mr. Nana Addo Dankwa AKUFO-ADDO and Professor Alpha CONDE.

9- Minister MESSONE, in turn, warmly congratulated the highest Togolese authorities for the efforts that Togo continues to deploy, especially during its current chairmanship of ECOWAS, in order to preserve peace and security in the country. region, in Africa and in the world.

10- Speaking of regional integration, Ministers MESSONE and DUSSEY welcomed the proactive actions deployed within the framework of ECOWAS and ECCAS which made it possible to stem the crises that are developing and open in their respective community areas and reaffirmed their determination to work together to achieve the desired integration through the implementation of the provisions of the framework agreement of the Continental Free Trade Area signed in March 2018 in Kigali.

13- Referring to international issues including the serious issue of organized cross-border crime, maritime piracy and terrorism, the two heads of diplomacy expressed their deep concern at the resurgence of these various acts, reaffirmed their firm condemnation and called for the pooling of efforts and the pursuit of international cooperation to overcome them.

14. On the sidelines of the official visit, the Head of Gabonese Diplomacy paid a courtesy visit to His Excellency Faure Essozimna GNASSINGBE, President of the Republic, President of the Conference of Heads of State and Government of ECOWAS.

15- On this occasion, Mr. MESSONE congratulated the Head of State for his commitment, alongside the mediator, His Excellency Professor Alpha Condé, which allowed the resolution of the crisis in Guinea Bissau.

16- At the end of his visit, His Excellency Noël Noël MESSONE, Minister of Foreign Affairs, Cooperation, Francophonie and Regional Integration, in charge of Gabonese Abroad of the Republic of Gabon, expressed his his Togolese counterpart, the Togolese Government and people, his heartfelt thanks and deep gratitude for the warm and fraternal welcome extended to him and his delegation.

17- The Minister of Foreign Affairs of Gabon invited Professor Robert DUSSEY to pay an official visit to Gabon.

18- His Excellency Prof. Robert DUSSEY accepted this invitation with good grace. The date of this visit will be fixed later through the diplomatic channel.