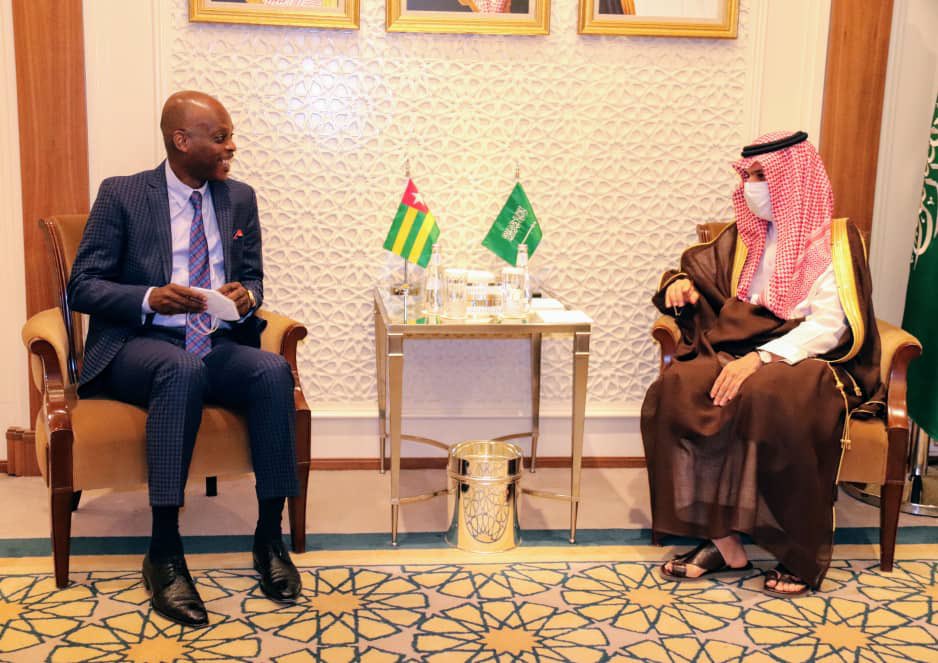 2. This visit, which takes place despite the context of the covid-19 pandemic, reflects the excellent relations of friendship and cooperation between the two States as well as the common will of the highest authorities of the two countries to further strengthen these relationships.

3. During his stay in Riyadh, Prof. Robert DUSSEY had with his Saudi counterpart in-depth discussions on issues of common interest, in particular, on the prospects for cooperation between their two countries, both bilaterally and within the framework of international organizations.

4. Noting the state of this cooperation, they welcomed its dynamism and the concrete actions and projects that have been carried out. In this regard, HE Prof Robert DUSSEY, on behalf of the Togolese government, praised the multifaceted support provided by the Kingdom of Saudi Arabia to Togo, both bilaterally, through the Saudi Fund for Development (FSD), which ” through international organizations, in particular, the Organization of the Islamic Conference (OIC) and the Islamic Development Bank (IDB) headquartered in Jeddah. He particularly thanked the Kingdom of Saudi Arabia for the facilities that Togo enjoys in the context of the participation of its citizens of Muslim faith in the rites of the Hajj as well as for the action of Saudi civil society organizations in Togo through NGOs, and, more particularly, through the Prince Salman Foundation.

5. With a view to improving the legal framework for their cooperation, the two parties have undertaken to continue discussions for the signing of other agreements in the near future. These are: – Memorandum of understanding between the chambers of commerce of the two countries; – Agreement for the promotion and reciprocal protection of investments and – Agreement on technical, economic and commercial cooperation. The signing of these agreements will make it possible to adapt cooperation between the two States in the evolution of the global context as well as the priorities and strategic options of each of the two countries on the economic level.

6. In this regard, His Excellency Minister DUSSEY provided the Saudi side with information on the Togolese government’s priority projects as well as on the possibilities for cooperation and partnerships between governments and between the Togolese and Saudi private sectors. These are cooperation projects in the fields of trade, agriculture, industry and tourism that fall within the framework of the implementation of the National Development Plan 2018-2022 and the sheet government road 2020-2025 of Togo.

7. He also announced the strengthening of the diplomatic representation of Togo in Saudi Arabia. Togo is planning to open an embassy in Riyadh. However, it will keep its Consulate General in Djedah which will be transformed into an office. His Highness Prince Faisal Bin Farhan Bin Abdallah Al Saud welcomed this positive development, stressing that Togo’s happy initiative will help to strengthen the bonds of friendship and brotherhood between the two countries.

8. Regarding industry and investments, he informed the Saudi side that the newly created Adéticopé Industrial Platform (PIA) is already operational and invited Saudi businessmen to invest in it. In this regard, the two parties intend to support their respective chambers of commerce, with a view to accelerating the process of signing a partnership agreement between the two chambers.

9. Minister Robert DUSSEY also had working sessions with Their Excellencies Dr. Majid Bin Abdullah Al Qasabi, Minister of Commerce and Mr. Kalid Al-Falih, Minister of Investment. During the discussions, Togolese and Saudi ministers agreed to recognize the paramount importance of investments as the primary engine of growth, development and prosperity. To this end, they decided to place more emphasis on the promotion of investments within the framework of their bilateral cooperation. The energy, maritime transport, trade, agriculture, real estate and infrastructure sectors have been identified as priority areas for intervention. At the end of these meetings, it was decided that the two Saudi ministers would pay visits to Togo, with delegations of businessmen, with a view to an on-site assessment of the opportunities presented to them. In this perspective, Minister DUSSEY received in audience delegations from the main companies operating in the targeted sectors as well as from the Saudi Fund for Public Investment.

10. At the regional level, the two ministers welcomed the convergence of views between His Majesty King Salman ben Abdelaziz Al Saoud of Saudi Arabia and His Excellency Faure Essozimna GNASSINGBE President of the Togolese Republic, on the importance of peace of security and stability for the development of nations. In this regard, he congratulated the President of the Togolese Republic, His Excellency Faure Essozimna GNASSINGBE, for his personal involvement and for the efforts made by Togo in the resolution of the security crisis in the Sahel.

11. However, the two ministers deplored the persistence of terrorism, the violent extremism of maritime piracy and other forms of crime on the African continent and especially in West Africa. The two parties are committed to working together for the pooling of efforts within the framework of international bodies with a view to achieving the objectives of peace, security and development at the global level.

12. In this regard, at the end of a working session he had with the International Center for the Fight against Extremist Ideology (ETIDAL), Minister DUSSEY expressed to the Saudi side Togo’s wish to benefit from the support of this institution, within the framework of the fight against terrorism. A memorandum of understanding will be signed between the Togolese government and the Center, with a view to formalizing this partnership.

13. At the end of this meeting, Prof. Robert DUSSEY expressed his deep gratitude to the Saudi authorities and invited his Saudi counterpart to pay an official visit to Togo very soon.