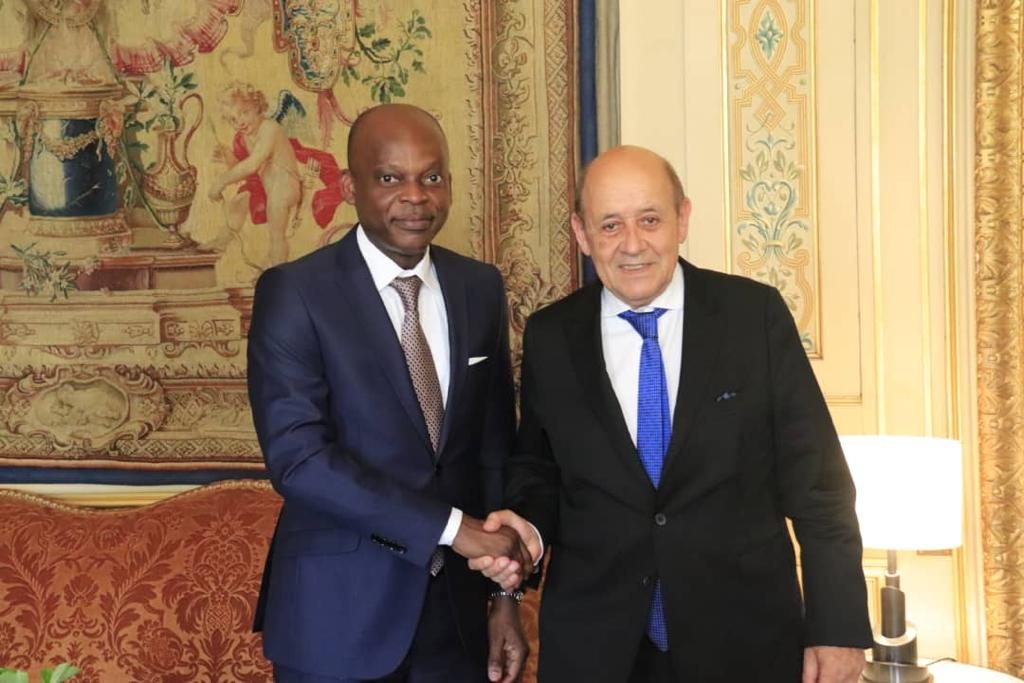 1- S.E. Prof. Robert DUSSEY, Minister of Foreign Affairs, African Integration and Togolese Abroad made a working visit to France, from 23 to 24 July 2019, at the invitation of HE Mr. Jean-Yves LE DRIAN, Minister of Europe and foreign affairs of the French Republic.

2- During their meeting, the two Ministers exchanged views on issues of common interest related to bilateral cooperation and collaboration on regional and multilateral issues.

3- Referring to the bilateral issues, the two personalities welcomed the excellent quality of the historic relations of friendship and cooperation between France and Togo and reaffirmed their willingness to continue working closely together for the strengthening and development of these relationships.

4- The Minister DUSSEY did not fail to express the strong thanks of the Togolese Government for the multifaceted support that France brings to it in its drive towards development, notably through the actions of the French Development Agency (AFD) and the Cultural Action Service, particularly in the field of water, sanitation, education, research, energy and culture.

5- Examining development issues, Minister Dussey declined the main axes of the National Development Plan (PND) and the opportunities it presents for the French private sector, already very present in Togo through twenty companies, and whose investments and expertise are highly anticipated.

France is one of Togo’s top trading partners and the Togolese Minister has called for the strengthening of these ties through a greater partnership between the private sectors of the two countries.

6- On the security front, the Minister praised France’s support in the training and preparation of the Togolese armed forces for missions abroad in the framework of peacekeeping operations as well as cooperation in the field of security. external operational information.

7- At the political level, the Minister LE DRIAN congratulated Togo for the considerable progress that it has made in recent months by carrying out the constitutional and institutional reforms and organizing in a peaceful and consensual manner, the legislative elections of December 20th, 2018 and the premises of June 30, 2019.

In this respect, Professor DUSSEY has asked for the support and accompaniment of French cities, which already have proven experience, to young Togolese communes who are starting a new apprenticeship in decentralization and management of local communities.
He also took the opportunity to reassure his counterpart of the inclusive preparation of the 2020 presidential elections.

8- Speaking of regional issues, the two Ministers expressed concern about the resurgence of acts of terrorism, radicalization, violent extremism and maritime piracy on the continent and particularly in West Africa.

9- In this regard, the Togolese Minister congratulated his French counterpart for his support to the West African States in their response to terrorism and violent extremism, through the Serval and Barkhane operations and the support at G5 Sahel.

He noted, however, that the military response alone can not suffice and recalled the importance of preventive diplomacy, which requires governments to assume their roles and take the responsibility to protect their citizens, to make efforts to move closer to grassroots communities, to anticipate socio-political crises, to know how to stay at an equal distance from religious denominations while respecting the principle of secularism while playing their role of sovereign regulator.

10. Concerning multilateral issues, the two Ministers expressed their concern over the repeated attacks against multilateralism in recent years.

11- They agreed to strengthen their collaboration in international fora, coordinating their positions, not only for a better defense of their common interests, but also for the preservation of international peace and security.
The Heads of French and Togolese diplomacy also welcomed the positive development of the ongoing negotiations for a new ACP-EU Partnership Agreement.
They also reaffirmed their common desire to support all initiatives and take the most appropriate measures in the fight against global warming.

12- At the end of his stay, the Head of Togolese diplomacy expressed to his French counterpart his heartfelt thanks and gratitude for the quality of the reception he received and his delegation.