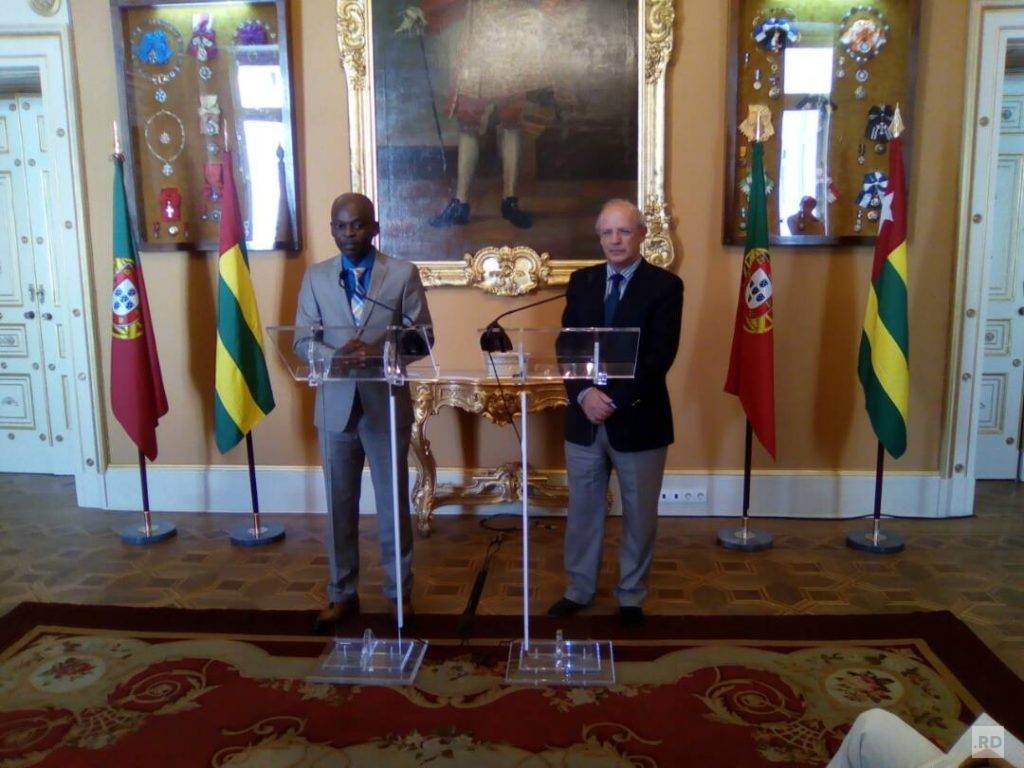 MINISTER FOR FOREIGN AFFAIRS, COOPERATION AND AFRICAN INTEGRATION OF THE TOGOLESE REPUBLIC IN LISBON, FROM 20 TO 22 JULY 2017

The Minister of Foreign Affairs, Cooperation and African Integration of the Togolese Republic, His Excellency Prof. Robert Dussey, from 20 to 22 July 2017, paid a working visit to Lisbon, Portugal.

During his visit, Professor Dussey was received in audience by his counterpart from Portugal His Excellency Augusto Santos Silva to discuss issues of common interest to both countries.

The delegations of the two countries led by their Excellencies Santos Silva and Dussey then held a working session to discuss issues related to bilateral relations between Portugal and Togo and, on the other hand, Togo’s international agenda, which has assumed the current chairmanship of the Economic Community of West African States (ECOWAS) since June 04 for a twelve-month term.

At the bilateral level, the two sides reviewed the political and economic cooperation between Togo and Portugal. They congratulated themselves on the commercial plan for the opening of an airline between Portugal and Togo. Since the beginning of this week, TAP Portugal has been serving the city of Lome. With regard to political cooperation between the two countries, the two diplomats welcomed the regular exchanges between them and their convergence of views on international issues. On the economic front, Messrs. Santos Silva and Dussey agreed to work towards increased trade and investment promotion between the two countries.

Addressing Togo’s international agenda, the Head of Togolese diplomacy spoke in turn about the priorities of Togo’s presidency of the ECOWAS, maritime security in the Gulf of Guinea and Togo’s expectations for the 5th EU-Africa Summit to be held in November in Abidjan, Côte d’Ivoire.

Professor Dussey therefore insisted on the wish expressed by the President of the Togolese Republic, His Excellency Faure Essozimna Gnassingbe, to make his mandate at the head of ECOWAS a mandate for action. To this end, four main priorities have been defined, namely:

To work towards the effective realization of the free movement of goods and people in the subregional space;
Organize an international conference on peace and the fight against violent extremism in Africa;
Organizing an economic forum between ECOWAS and partners;
Call for the establishment of an effective health system in West Africa.
Finally, Professor Dussey reiterated to his counterpart the holding in Lome of the Africa-Israel Summit from 22 to 26 October 2017 and the 33rd Ministerial Conference of the International Organization of La Francophonie from 24 to 26 November 2017.

His Excellency Santos Silva congratulated his host for Togo’s commitment to the development of Africa in general and to ECOWAS in particular through the concrete and courageous initiatives taken by its highest authorities. He assured him of the support of Portugal for the success of all these commitments. It also reiterated its willingness to implement the necessary efforts to further strengthen cooperation between Togo and Portugal.