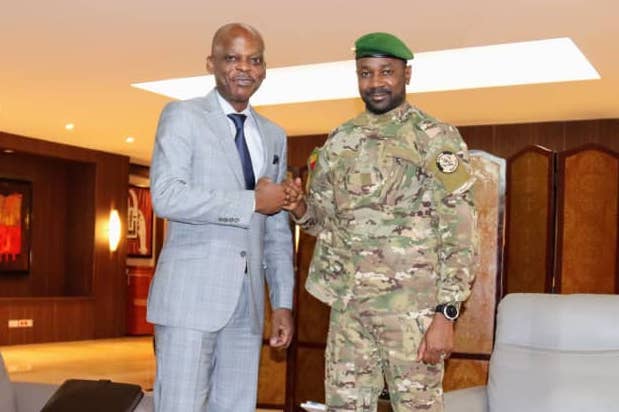 1. As part of the strengthening of the excellent relations of friendship, solidarity and cooperation that unite Togo and Mali, H.E. Prof. Robert DUSSEY, Minister of Foreign Affairs, Regional Integration and Togolese Abroad, paid a working visit to Bamako in Mali on September 6, 2021.

2. During this visit, he was received in audience by His Excellency Colonel Assimi GOITA, President of the Transition.

3. During their meeting, Minister DUSSEY expressed to the President of the Transition, on behalf of HE Mr. Faure Essozimna GNASSINGBE, all the congratulations of Togo for the efforts that he continues to deploy to contribute to the appeasement of the climate. policy and national reconciliation in Mali.

4. Minister DUSSEY also encouraged him to intensify the implementation of the reforms advocated by ECOWAS with a view to a peaceful and inclusive transition leading to free, democratic and transparent elections.

5. Colonel Assimi GOITA renewed, on behalf of the Malian people, his gratitude to the Togolese President for the involvement of Togo in the search for consensual solutions to the crises which shake Africa in general and threaten in particular stability in Mali and in the Sahel.

6. The President of the Transition commended the professionalism of the elements of the Togolese Defense and Security Forces who, in a spirit of solidarity, fight alongside the Malian Armed Forces within the United Nations Multidimensional Integrated Stabilization Mission. Mali (MINUSMA) and in other peacekeeping operations in Africa.

7. Minister DUSSEY also met with his Malian counterpart, H.E.M. Abdoulaye DIOP on matters of common interest of a bilateral and regional nature.

8. Addressing bilateral issues, the two Ministers welcomed the excellent cooperation relations that unite their countries and reaffirmed their willingness to work together in the search for lasting solutions to the security and socio-political crisis in Mali.

9. At the regional level, the two Ministers expressed their deep concerns at the resurgence of terrorism in the Sahelian strip, plagued by the activism of armed groups, reiterated their firm condemnation of this scourge in all its forms and called for mutualisation. efforts within the framework of increased international cooperation with a view to its eradication.

10. Addressing the situation in Guinea, the two Ministers noted the urgent need for the brotherly people of Guinea to join the path of inclusive national dialogue for a peaceful transition in order to lead to democratic elections