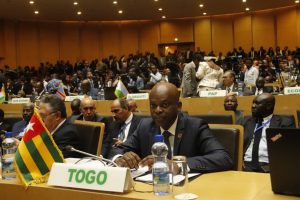 First of all, I would like to thank the Prime Minister of the host country for their regime of hospitality worthy of a country hosting the headquarters of our august Institution.
I would also like, on behalf of the President of the Togolese Republic, HE Mr. Faure Essozimna GNASSINGBE, who so much wanted to participate personally in this Summit, but ultimately retained in the country as part of the campaigns for the presidential election, the first round of which is scheduled on February 22, congratulate the new President of the Conference of Heads of State and Government for his election to the head of our Institution and congratulate the outgoing President for his excellent work of service to the African community.
Allow me, moreover, Ladies and Gentlemen, Heads of State and Government, to thank you, on behalf of President H.E. Faure Essozimna GNASSINGBE, for your great interest in the issue of African Diasporas and people of African descent.

I would also like to express my gratitude to the Commission for the spirit of flexibility and great understanding shown towards my Delegation by agreeing to examine the above point.

The quest for lasting change on the African continent requires the creation of conditions conducive to the development of an economic, social and sustainable society through the capitalization of skills, expertise and leadership from the African diaspora, understood as the ‘together’ people of African origin living outside the continent, whatever their citizenship and nationality and who wish to contribute to the development of the continent and to the building of the African Union ‘.

Indeed, in a world in convergence towards globalization related to economic, financial, digital speculations and other transversal opportunities, Togo, like the other countries of the continent, has demonstrated its faith and its confidence in the constructive force sisters and brothers who live across borders, multiplying initiatives aimed at facilitating their return and their involvement in the economic and cultural development of their country and the continent.

In addition, marked by shrinking identities which often translate into tougher migration conditions, more complex asylum-granting measures, discriminatory treatment suffered by populations of African descent, Africa must ask itself the foundations of an African response to identity issues while broadening the approach.

This approach serves to recall and underline the contribution of Africa to humanity as well as the rich contribution of communities of African descent to history.
The sixth continent, as the African Union Commission rightly called it, constitutes an important economic, political and cultural power which cannot leave us indifferent. It represents a historic community of values ​​and cultures, crossed today by models of social and professional successes useful to Africa.

While congratulating the African Union Commission for the enormous work that is being done on diasporic issues, notably through the efforts of the regional offices and the Directorate of Citizens and the Diaspora, I would nevertheless like to advocate in favor of ” a more committed approach by the African Union towards our brothers from the outside and Afro-descendants.
It is common ground that people of African descent and the diaspora play a crucial role in the emancipation of the continent, by supporting Africa’s development and programs through effective advocacy within the legislative and executive bodies of their country. reception, civil societies, NGOs, academia. Likewise, the African diasporas, by virtue of their expertise and their economic weight, remain potential stakeholders in the implementation of the African Union’s Agenda 2063.

In this sense, it is imperative that we can celebrate this important fringe of the Continent which lives beyond the borders of Africa and testify to it of all our fraternity, while giving it a place of choice in the construction of “this Africa that we want “.
To do this, on the instructions of the President of the Togolese Republic, I would here submit to your appreciation, the proposal to decree the 2020-2030 decade as “Decade of African Diasporas”.
This Decade will offer the Commission the chance, together with the organizations representing the African diasporas, to carry out reflections with a view to implementing a genuine diasporic policy and a solid action plan which should concretize the return and the increased involvement of the diaspora in the continent’s development process.
It will also be an opportunity to break down the walls that hinder the return of brothers of African descent from the West Indies, the Caribbean and America.
It will also be a question not only of celebrating African heritage and culture with its roots but also of allowing those passionate about African culture to find themselves in communion with the continent. The Decade of the African Diasporas will increase the positive bias (patriotism) of the African Diasporas vis-à-vis the Continent.

The Decade of the African Diasporas aims to be inclusive and will have as main components the launch of the event, a global awareness and mobilization campaign aimed at promoting African roots through a strategic communication plan and country events.
It is in this perspective that the African Diaspora Economic Forum is part of the plan that Togo intends to organize on the theme “The contributions of the African diaspora to the development of the continent”.

The pressure is strong to give priority to the economy, given the challenges to be met in Africa, the forum aims to lay the foundations for an innovative framework of dialogue and permanent exchanges between Africans from outside, the State and non-state actors for the purpose of creating and promoting conditions favorable to the full participation of these Africans in the socio-economic development of the continent. This initiative is about strengthening cultural, social, economic and financial cooperation between African communities around the world and the continent.

The Lomé meeting, which will be consecrated by a Declaration, will offer the opportunity to reflect on the mechanisms to be implemented in order to support the productive investment and entrepreneurship initiatives of the African diaspora in order to improve and to increase the impact of its actions on economic development. It will also be an opportunity to discuss ways that can allow Africa and African communities living on other continents to help each other.

All in all, the Lomé Forum will also affirm that the mobility of people and co-development strategies can be a solution for the integration of populations of African descent and for the accession of our continent to emergence.

The moment is favorable for a rise in power of the African diasporas. However, in general, they complain of not participating and being associated with the implementation of public policies which require North-South interconnections and transfers. And yet the potential of the diaspora in the development of Africa is known to all. We must therefore find levers to strengthen the commitment of our diaspora to the continent.
By deciding here and today to declare 2020-2030 the Decade of African Diasporas, we will have to bring together members of the diaspora and decision-makers as well as members of the diaspora at the national, regional and global levels for the development of our continent.