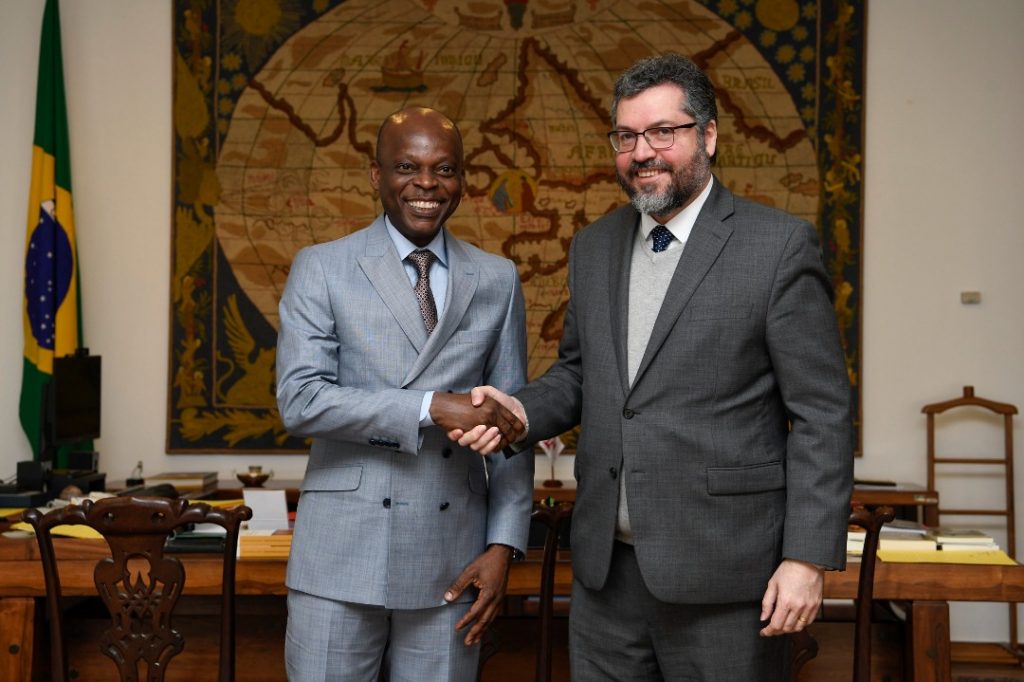 2- During this visit, the two Ministers exchanged views on issues of common bilateral, regional and multilateral interest.

3- Addressing bilateral issues, Ministers ARAUJO and DUSSEY welcomed the excellent relations of friendship and cooperation that have united the two countries since 1972 and reaffirmed their willingness to work closely together for the deepening and the development of these relationships.

4- Referring to the agreement establishing the Joint Commission for Cooperation between the Government of the Togolese Republic and the Government of the Federative Republic of Brazil, signed on 18 August 1988 in Brasilia, the two Ministers undertook to organize in the future the first session of the latter, with a view to strengthening their collaboration in the political, economic, security, scientific, cultural and technical fields.

6- Examining development issues, Minister DUSSEY announced that Togo has recently adopted a National Development Plan articulated around three axes concerning the establishment of a logistics hub of excellence and a development center. first-rate business in the West African sub-region, the development of agricultural processing, manufacturing and extractive industries poles and the consolidation of social development and strengthening of the mechanisms of inclusion.

7- In this regard, he invited the Brazilian side to support Togo in the implementation of this plan, through the mobilization of investments.

8- Also, the two Ministers agreed on the forthcoming organization in Brazil of a Togo-Brazil Economic Forum to be attended by the Head of State HE Mr. Faure Essozimna GNASSINGBE , President of the Togolese Republic.

9- Welcoming the cotton4 + initiative that has helped to strengthen the technical capacity of Togolese cotton farmers by Brazilian experts, Minister DUSSEY expressed the desire of the Togolese side to see this experience extend to other sectors, including coffee, cassava, cashew and cattle breeding.

10- Furthermore, the Togolese Minister took note of the Brazilian offer to assist African countries in controlling their borders, training pilots and sailors and expressed the willingness of the Togolese side to benefit of this offer.

11- Noting the need to strengthen cooperation between the private sectors of the two countries, the two Ministers pledged to work together for the organization of exchange and prospection visits for economic operators from Togo and Brazil and their participation. major meetings organized in one or the other party in the economic and related fields.

12- In this regard, the Togolese and Brazilian Ministers invited the chambers of commerce and other professional associations of businessmen of both countries to sign partnership agreements.

13- Speaking of regional issues, the two Ministers referred to the resurgence of acts of terrorism, radicalization, violent extremism and maritime piracy on the continent and particularly in West Africa.

14- In this regard, the Togolese Minister congratulated his counterpart for the Brazilian initiative to develop a joint strategy with West Africa on security in the South Atlantic and agreed with him on the forthcoming organization in Lomé of a high level meeting on security issues between West Africa and Brazil.

15. With regard to multilateral issues, the two Ministers stressed the importance of strengthening their collaboration within the framework of International Organizations, in particular by giving each other mutual support in the event of their candidacy for a position within the Organization. a given organization.

16- In this regard, the Togolese Minister informed his counterpart of Togo’s support for the candidacy of the Federative Republic of Brazil for the position of non-permanent member of the United Nations Security Council for the period 2022-2023.

17- In the margins of this interview, Prof. Robert DUSSEY led a conference on “Violent Extremism and Security Challenges in West Africa: What Role for Preventive Diplomacy? At the Rio Branco Institute of Brazil.

18- In his presentation, Minister Dussey, after recalling that extremist groups want to make West Africa a multi-hazard society, has demonstrated the limits of security and military response to the threat and listed some solutions based on preventive diplomacy to stem the evil.

19- In this regard, he recalled that preventive diplomacy requires governments to assume their roles and take the responsibility to protect their citizens, to make efforts to get closer to citizens and communities, to anticipate socio-political crises, to be able to stay at an equal distance from communities and religious denominations while respecting the principle of secularism while playing their role of sovereign regulator.

20- In addition, Minister DUSSEY was received in audience by Mr. Wilson WITZEL, Governor of the State of Rio de Janeiro. Cooperation issues were at the center of their discussions.

22- He finally exchanged with the leaders of the Afro-Brazilian communities and the Togolese diaspora in Brazil that he invited to take part in the Economic Forum of the African diaspora planned in Lomé on 28 and 29 November 2019.

23- At the end of this visit, the DUSSEY expressed to the Minister ARAUJO, to the Government and to the Brazilian people, its warm thanks for the quality of the hospitality and hospitality reserved for him and his delegation during their visit. stay in Brazil and invited his counterpart to visit the Togolese Republic.

24- HE Mr. Ernesto ARAUJO accepted this invitation, the terms of which will be agreed through diplomatic channels.