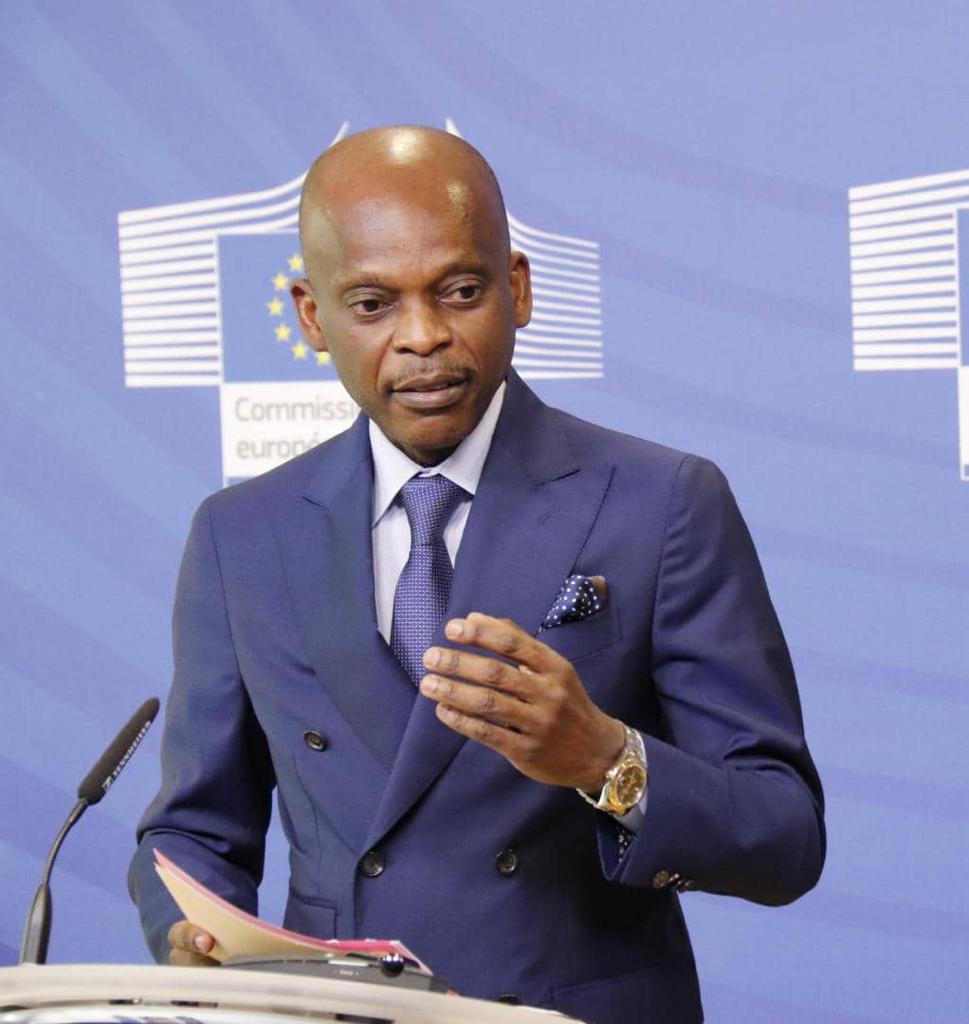 Question 1: Professor Robert DUSSEY, hello. The end of the year is usually the time to take stock. 2021 inexorably marks its last days. What is your assessment of Togo’s diplomatic action in 2021?

Thank you for the opportunity you have given me to review some of the highlights of Togo’s diplomatic action in 2021.
To come back to your question, even though there are things that could have been done better or otherwise, I can say, without being pretentious, that the results of Togolese diplomacy in this year 2021 are positive. Whether bilaterally or multilaterally, we have made progress, despite a slightly more complicated context due to the Covid-19 health crisis.
The great merit of Togo’s diplomatic prowess goes to the Head of State, His Excellency Faure Essozimna GNASSINGBE, whose noble vision for the international influence of our country and the development of all its populations, transcribed in the government roadmap. Togo 2020-2025, serves as a compass for the action of my department. You know, diplomacy is a tool in the service of government action. Our mission is therefore to mobilize resources, expertise and external relational networks to support the achievement of the priority projects of this roadmap. We are doing everything in our power to succeed in this mission.

Question 2: What explains, Minister, that you have opened up new areas of cooperation with partners?

Togo makes it a point of honor to nurture its friendships with its traditional partners who have always been by its side: France, Germany, the United States of America, China, Japan, Russia, Israel, Turkey, etc.
It is in this context that the official visit to France of the President of the Republic, His Excellency Mr. Faure Essozimna GNASSINGBE, from April 7 to 9, 2021, takes place, during which he had a tête-à-tête. fruitful with his counterpart, French President Emmanuel Macron. About twenty meetings were organized during this visit with both the public authorities and the heads of large groups in the French private sector, around flagship projects in Togo such as decentralization, energy, network extension. electricity, digitalization and agriculture.

With Germany, relations are also in good shape, as evidenced by my visit there in March 2021 during which I met, among others, my German colleague, Mr. Heiko MAAS and others. members of the government as well as the office of German small and medium-sized enterprises. Mr. Gerd Muller, German Minister for Economic Cooperation and Development, in turn visited Togo from June 13 to 15, 2021. Important agreements relating to German-Togolese cooperation were signed on these occasions.

However, depending on our ambitions, we are also working to diversify our partnerships by exploring new horizons. It is in this dynamic that I made official visits to Turkey, Saudi Arabia, Qatar, and received in Lomé, the visit of the Minister Delegate for Foreign Affairs of the Kingdom of Saudi Arabia, the Foreign Ministers of Algeria, Mali, etc.
It should be noted that with Turkey, our relations have been particularly strengthened with a strong component of economic and commercial cooperation as evidenced by the visit to Lomé of President Recep Tayyip ERDOGAN on October 19, which marks the recognition of the attractiveness of our country. Lomé will host next year the 1st Turkey-Togo Business Forum which will be an opportunity to introduce Turkish businessmen to the investment opportunities that abound our country. Large industrial groups and business owners such as MUSIAD and DEIK wish to invest in our country.

As announced, the opening of our embassy in Ankara will be effective in 2022, that of Turkey in Lomé being operational since April 2021. I would like to clarify that it is not only Turkey that is interested in Togo. India, which is now an emerging power, opened its embassy in Lomé earlier this year and the Kingdom of Morocco announced its intention to do the same shortly.

Question 3: It is clear that you are a fervent promoter of the projects of the Togo 2025 Government Road Map and of the economic opportunities of our country with foreign partners. What about our multilateral cooperation?

In the multilateral field, all states are equal, in principle. But they don’t have the same influence there. Our ambition is to make Togo’s voice more audible in international organizations by being more active within the deliberative bodies. Whether at the level of the institutions of the United Nations system or of continental or regional integration organizations, Togo’s positions, often aligned with those of its home groups (ECOWAS, AU, OEACP), are guided by the principle of international justice and equity, and by the constant will of our country to make its modest contribution to the preservation of peace and security in the world. Our country maintains an unwavering faith in multilateralism through cooperation and remains mobilized to take advantage of the facilities offered by the specialized agencies of the United Nations to developing countries.

Our relations with Europe take place within the framework of the EU-OEACP Partnership Agreement, which I had the honor of chairing the negotiations. We initialed the draft of this agreement in Brussels last April.

At the regional and sub-regional level, Togo actively participates in integration projects, which is a vector of development.

Question 4: You are very involved in the success of the political transition processes underway in our sub-region as well as in the fight against terrorism. My question may be that of a layman, but tell me, Minister, why Togo is so involved in these crises so far from us?

There, you are wrong! These crises are not that far away from us. Terrorism is an insidious and rampant phenomenon that must be taken seriously and combated by all means. The recent terrorist incursion into our country in Kpendjal is proof of this.

By intervening in the countries of the Sahel most prone to instability and those most confronted with terrorism, Togo is in fact working, in anticipation, for its own security and that of the Gulf of Guinea. As the late President GNASSINGBE Eyadema said so well, “If your neighbor’s hut is burning down, you must hurry to help put out the fire, otherwise the fire will spread to your own house.”

On September 28, 2021, on the occasion of the diplomatic reopening of 2021-2022, I presented Togo’s strategy for the Sahel which specifies the vision and the values ​​that underlie our involvement in this region. These values ​​are regional patriotism, Pan-Africanism, solidarity, our high sense of responsibility and awareness of our community of destinies. On the security front, it is time for African countries to come out of systematic dependence on the outside to work resolutely to consolidate endogenous defense and collective security mechanisms. Our strategy is based on four (04) axes: regional and interregional cooperation in the service of peace and stability, exporting the Togolese vision of “positive peace”, support for the political normalization process, support responsible governance for more social and political inclusion in the States of the Sahel region.

It is in application of this strategy that Togo is actively supporting the transitions underway in Mali, Chad and, to a lesser extent, the Republic of Guinea. The holding in Lomé on March 8, 2021 of the second meeting of the Transition Support Group in Mali (GST-Mali) and its third meeting that Lomé is preparing to host on January 8, reflect our highest commitment. level in the process of return to political and institutional normality in this brother country.

Question 5: Let’s go to another register if you allow it. It is about the diaspora which occupied an entire section of your agenda in 2021. What explains this renewed interest?

The attention we pay to the Togolese diaspora is not new. However, I agree with you that it has seen a real boost in recent years. Almost all developing countries today seek to capitalize on the potentials of their diasporas. The Togolese region is a real reservoir of skills, talents and resources which, better oriented, can have a real impact on the development momentum of our country.

In accordance with the vision of the Head of State, President Faure Essozimna GNASSINGBE, to involve all Togolese in the work of national construction, my department has taken a number of initiatives aimed at optimizing the contributions of compatriots in the country. outside the economic development of our country, the most recent of which are the creation of the High Council of Togolese Abroad (HCTE), the launch of the Diaspora Window in May 2021 and the inauguration, on November 25, 2021, of the House of the diaspora, seat of these two institutions. The HCTE is now an interlocutor who is both representative and federator of the Togolese diaspora in its diversity. Implementing its role in the mobilization of productive investments in Togo, the HCTE successfully organized, on April 10, 2021, a webinar on the theme: “invest in Togo”.

As for the Diaspora Window, it is a technical tool available to our compatriots in the diaspora as well as an open and flexible platform that meets the expectations and requirements of the diaspora and makes it possible to technically support project leaders in order to facilitate their realization. He is the interface between the government and investors and project leaders within the diaspora.

My department has also initiated a census project of Togolese living abroad in order to know their number, their geographical distribution and their skills profile. This census will be officially launched in 2022.

Togo’s commitment to the diaspora was not limited to the national level but was brought to the continental level where, on the initiative of our country, the 34th Conference of Heads of State and Government of the African Union of February 2021 decreed 2021-2031: decade of African roots and diasporas. By carrying this initiative, Togo was convinced that the African diaspora is an essential actor in the continent’s march towards the achievement of the AU’s Agenda 2063. The High Committee for the Decade Agenda that I chair has been established and has held several meetings. An action plan covering the first years of the decade has just been adopted.

Question 6: Minister, we are coming to the end of our interview, your final word.

My final word will be a prayer, asking for the grace, protection and blessing of God on the Head of State, President Faure Essozimna GNASSINGBE, to whom I offer my best wishes for good health and inner peace.

I hope that the grace of the Lord will also accompany the Prime Minister, Madame Victoire TOMEGAH-DOGBE, as well as the entire Government.

To all our partners, including you, men and women of the media, I wish a happy new year 2022.